“And the stockings were hung by the chimney with care…”

These words, frequently read around the fireplace at Christmas time, have often inspired the desire to own a fireplace of one’s own. It is a big decision to make for a remodeling project. 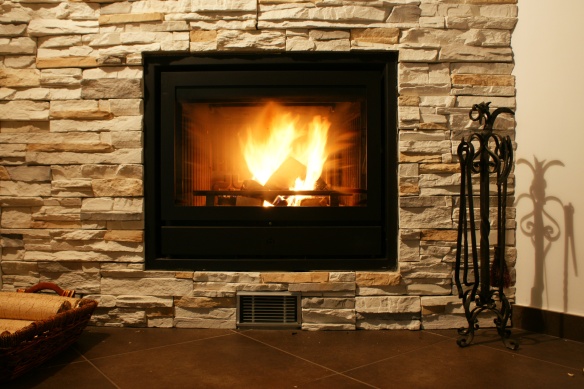 The mantel is always the first thing to draw you in. Whether you’ve got your eye on a sleek, off center design to enhance a contemporary home, a rough barn wood beam to go ‘rustic’ or a lower slate mantel that serves as a seat or foot rest, it’s best to be informed about the actual place the fire will burn.

It is most cost effective to enclose fire in a box. This is the interior of the fireplace that contains the fire and collects the smoke. Fire consumes some 500 cubic feet of air per minute.

18th Century inventor, Benjamin Thompson, known as “Count Rumford” redesigned fireplaces by creating a narrower opening and made the back and sides to slant inward. He also narrowed the passage through which the smoke exited the chimney. Because Rumford’s fireplaces radiated more heat and were less likely to smoke, Thomas Jefferson even installed them in his home in Monticello. That was in the 1700’s yet many of Rumford’s ideas became standard.

Some experts say traditional fireplaces can draw four to ten times as much air from the room then is needed to burn the fire.

Convection heat – a movable substance, hot air or liquids, circulates into cooler areas. The colder outside the colder the air the fireplace sucks in.

Gas fireplaces have the most advantages to preserve heat and burn clean.

Adding a fireplace to your home or doing something new with an existing fireplace will change the entire “feel” for the room. It’s something we can help with before you start the remodeling process. Give us a call!

1 thought on “Fireplaces, Part I”